Olleik, Abi Saab and Mekdad in the event of the “Lebanese war day” – April 13. 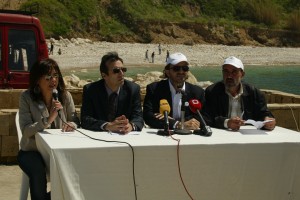 MOREP and Ahead, a coalition of reformists and peace activists, a good news for Lebanon to get such volunteers and liberal candidates for the 2009 election.

More than 350 persons assisted in this big event in the port of Byblos, Lebanon, coming from all the country, Becharre, Mazraat Bani Saab and every village of Becharre District, Baalbeck,, Elhermel, Deir AL-Ahmar, Byblos, Achrafieh and Nabatieh. All 3 candidates declared their union under the title of peace, reform and environment, the “Coalition Of Democratic Liberal Forces” will grow to cover the country.

Dr Rami Olleik, the head of “Lebanon Ahead” declared the principle of the coalition in his speech, the program and the target: “Compatriot Comes First”, his rights of living in a developed country.

Mr Ali Mokdad, of Baalbeck – ElHermel candidate approved the both above speeches and stressed on the low progression of Baalbeck through the past decades.

Finally, on this occasion a video clip was issued and distributed concerning the countryside problems.
FROM
THE MOREPISTS Broadcasting Network

Hardly working for a safe environment including politics to give our grandchildren a better future.
View all posts by admin →
This entry was posted in Uncategorized and tagged Civil War, Middle East Peace, Middle east Politics, MOREP NEWS. Bookmark the permalink.