1. Introduction
JJ Rousseau ends his social contract with this conclusion: Now that I have laid down the true principles of political right, and tried to plant the state on its own base, the next task would be to strengthen it by its foreign relations. That would bring in the law of nations, commerce, the right of war and conquest, public law, leagues, negotiations, treaties, etc. But all this adds up to a new subject that is far too vast for my narrow scope. As it is, I have ranged further afield than I ought to have.

Since that time at the end of the 18th century many new theories in political philosophies were added and more varieties of political sciences were created to cite international relations, foreign policies, diplomacy, etc…

Each country on earth as well as each civilization of earth has drafted and sculptured its own foreign policy depending on its tradition and philosophy of life however, none has tried to mold political sciences as the mathematical science of political systems, and to consider it from purely scientific and mathematical angles as myself has considered this in the center for research on political systems for the middle east at http://systempolitics.synthasite.com/ and on the Morepists Press.

Therefore, if we wish as Americans or Canadians being North American neighbors, to approach politics in this 21th century with a modern mentality same as USA approaches physics and space scientific researches, whereby USA had proven to be the most successful nation in that respect, then we should handle politics as if sitting inside a Star Trek space ship which travels across galaxies in search for know-how, establishing democracy and looking for new civilizations, otherwise, it is just nonsense to be traveling towards a space station with outstanding technology and science packages and still take political decisions in the spirit of 16th till 19th centuries theories, being just literal in their approaches to complicated problems.

I think that the philosopher JJ Rousseau had meant in his conclusion something of modern in establishing foreign relations which should be searched for, in addition that it has to be objective in its content in order to enable it to be durable. My proposed four geometry models of secular political systems in the world best fit to this end, and can be found in the paper entitled discourse on politico-mathematics for peace in the Middle East under the page Political System Modelling I-IV of http://systempolitics.synthasite.com/political-system-modeling.php

In this article, I expose the four geometric models of secular systems on pages 5 and 10 similar to the above paper which are considered to be opened on each other i.e. accessible to each other at all their poles. They all fit altogether into about a 10 dimensional space which in these days is the subject of String Theory in Theoretical Physics.

Below are the two out of four sketches of the fundamental geometries concerning the proposed secular systems foundations found in the Middle East together with their graphical sketch representation and mutual interactions with each other.

Below are the other two out of four sketches of the fundamental geometries concerning the proposed secular systems foundations found in Europe and America together with their graphical sketch representation and mutual interactions with each other.

Figure 3. Geometric Representation of the Secular European Hexagon on the upper sketch and of the Secular American Pentagon on the lower sketch. The respective foundations or poles are situated to the left of the maps. 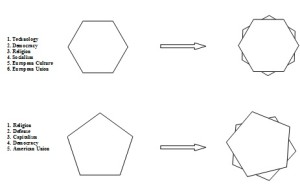 The four proposed geometries with their poles make the object of four algebraic vector subspaces, which when enabled to open or communicate with each other through intermediate boxes with gates receiving information’s inside one stream from a pole on a certain secular geometry, thus stocking it, before diverting it following a logic Boolean order to another pole of another secular geometry.

3.1.1 Case of studies of single and dual pole exchanges among various models

Consider for example the claim that democracy is a foundation of the Jewish State although the Secular Zionist Model of Figure 1. Doesn’t bear such a pole contrary to the Secular American Pentagon who carries it. Since Israel was created in 1948, under particular American protection or guardianship, then this occurrence of democracy in Israel couldn’t be distinguished from the democracy pole in the American Secular Model, being exchanged from the American model to a common gated box, before being transferred to one pole of the Jewish Zionist Model, for example Jewish Culture, this latter being transferred to the gated box and from there to the American Secular Model.

3.1.2 Case of dual transfer of Technology and Democracy between 2 Geometries
As an example, consider the problem of Technology transfer in between the Secular European Hexagon and Arabic Cultural Heritage of the Secular Arabic Model.

This is carried away by exchange mechanism of one for the other, through entering and exiting an intermediate box as regulating mechanism, in order not to overload at a time one secular geometric model with full economic pole loads under different names as Socialism, Capitalism, Economic Development and Entrepreneurship, which are different appellations for Financial Methods or in short, Money Value or just Money.
Once this achieved, our secular model geometries tells us that in order to have a more system stabilities, it would be better while transferring Technology, to transfer with it Democracy i.e. Equality among humans from the European Hexagon to the Arab Square thus ensuring equalities among humans in common rights to exploit Technology. This dual transfer philosophy, had it been implemented before, then certainly we would not have reached some catastrophic consequences of the Arab Spring actually in progress, although its fruits are still raw to harvest.
This above objective means to enable or give rights to Europeans or Americans in implementing democracies or equalities among peoples of the Middle East, as though being advisors on human rights, without causing irritations to political governments or parties of these nations who can thus suspect the return of previous colonial rulings before Arabic countries independences.
When such a dual transfer had been undertaken, the expected results would be better as all peoples share the fruits of these, thus, causing a neither unbiased nor skewed geometry of the secular models under transfer stress and strains.

Hardly working for a safe environment including politics to give our grandchildren a better future.
View all posts by admin →
This entry was posted in OPINION and tagged Middle East Peace, Middle east Politics. Bookmark the permalink.